Overgate counts down to Dundee Summer Streets Festival this weekend 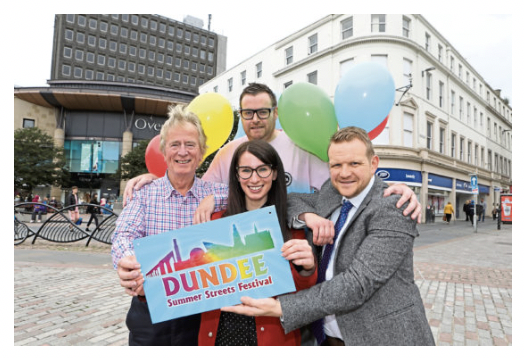 Final preparations are being made at Overgate ahead of the second annual Dundee Summer Streets Festival this weekend.

Promising an unmissable programme of street entertainment, live music and interactive games and attractions, the festival will be staged on Saturday the 20th and Sunday the 21st of July at locations across the city.

As the headline sponsor of Dundee Summer Streets Festival, Overgate will be joining in the fun with some feel-good family activities within the centre that are free and open to all.

On Saturday, shoppers can enjoy a host of musical talent from midday with Lonely Bones, Esperi, Haystack Monolith and James Liandu whilst on Sunday, Stefan Clarkin, Catrin Evans, Alan Muhyaldeen and Robbie Ward will be sound tracking the afternoon.

The festival zone within the centre will feature static bubble fun from Lyndsey Smiles and the Royal Society of Chemistry’s Chemistry of Curry. Also watch out for the roving menagerie from the Bureau of Silly Ideas – the street furniture is alive!

Furthermore, the Collector’s Treasure Trail will have outposts in Overgate – keep an eye on the digital screens for their story, and shoppers can expect further colour and fun as street tours and disco trails make their way through the centre across the weekend.

“Overgate is delighted to be supporting this year’s Dundee Summer Streets Festival as headline sponsor. The heart of the city is the place to be this weekend with a fantastic variety of all-ages entertainment and attractions.

“Within Overgate across both days will be music, treasure trails and lots of quirky activities. What’s more, it’s free and open to all so come along for what is sure to be an unmissable weekend.”