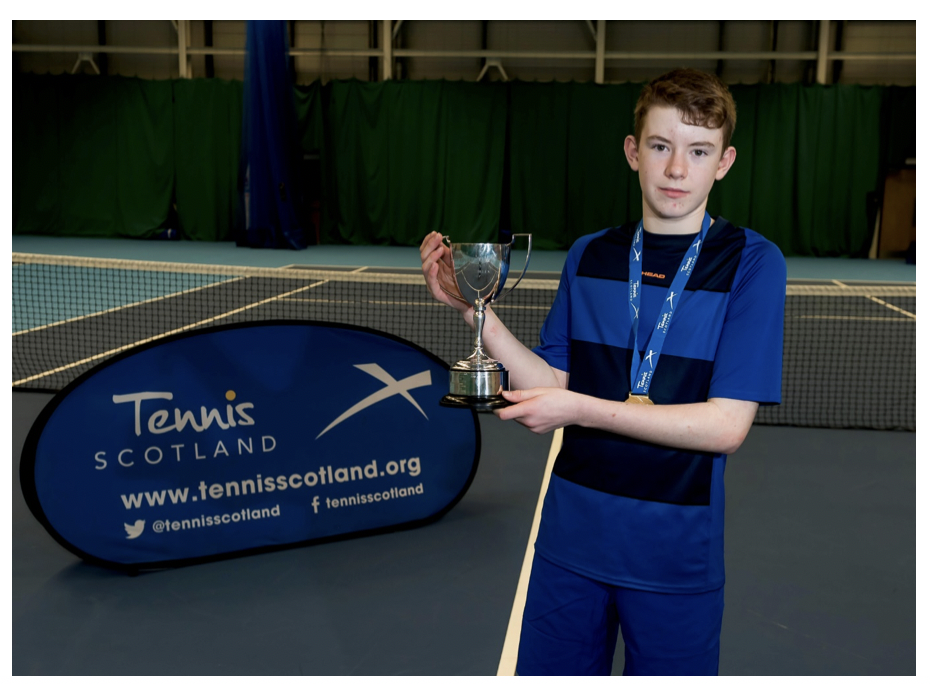 Overgate has extended its congratulations to local tennis talent, 13-year-old Ben Hudson, after he was named Young Sports Personality of the Year at the ANGUSalive Sports Awards. The awards celebrate sporting success across Angus and winners are chosen by an independent panel from Angus Active Schools, Dundee & Angus College, sportscotland, Scottish Disability Sport and an ANGUSalive Independent Board member.

Overgate has provided vital financial support for the young Dundonian who was the 12 & Under British Number 1 before recently moving into the 14 & under category where he is demonstrating exceptional promise. To date, 2019 has also proved successful, with wins at the Scottish Junior Indoor Championships at both 16 and under and more impressively 18 and under, combined with being selected for Great Britain to play against Italy, and playing in Tarbes, France at the “unofficial world championships at 14 and under”.

Prior to Overgate’s sponsorship, Ben’s tennis endeavours had been funded largely by his parents. Ben now trains three times a week at the Scottish National Tennis Centre, Stirling as part of the LTA Regional Player Development programme. Locally, Ben undertakes private lessons twice a week plus strength and conditioning work. Weekends for Ben and his parents are spent at national events, mostly across Scotland but increasingly across the UK and in 2019 extending into Europe.

The sponsorship by Overgate has allowed Ben to progress his tennis, in particular assisting with further training, equipment and travel to UK and European events.

“Overgate sends its congratulations to Ben on this fantastic award win. He is an outstanding young talent with immense ambition and great promise and the centre is delighted to have supported his endeavours. We wish him every continued success through what is shaping up to be an exciting year ahead.”