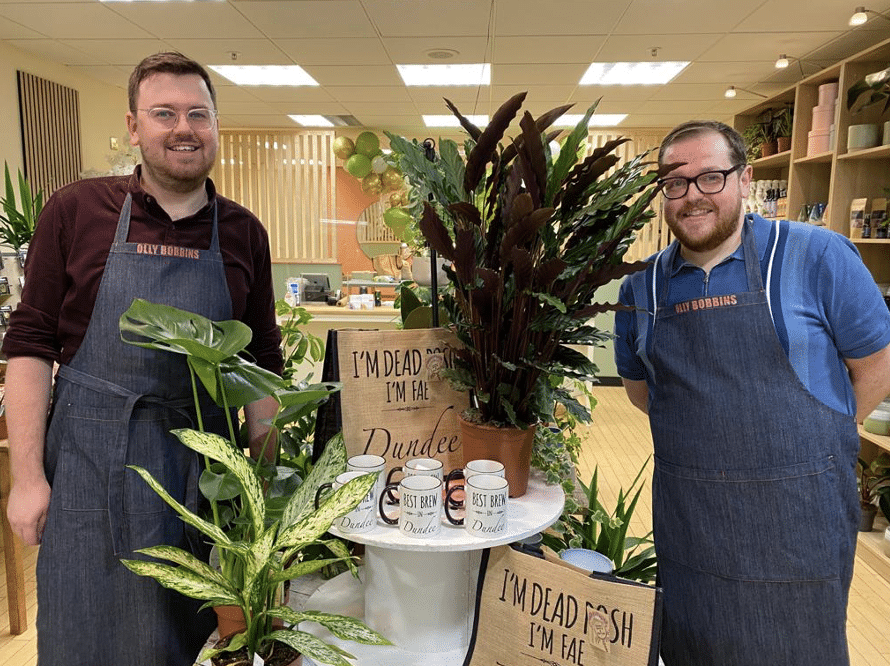 A small, family-run business which was a joint winner in the inaugural GROW at Overgate competition has opened a new store in the Dundee shopping centre.

Florist, plant and gift specialist Olly Bobbins was one of 16 applicants for the competition which offered small business owners or entrepreneurs from Dundee the opportunity to win retail space in the busy shopping centre for twelve months free of charge. Now, following the success of the company’s first year of business in Overgate, Olly Bobbins – which was founded in 2017 by owners Paul McFawns and Joe Rodger – has expanded into a physical store in the centre.

Located opposite New Look on the upper mall, adjacent to the Customer Service Desk, the new store is already proving a popular customer destination for fresh floral arrangements for every occasion, beautiful plants, and quirky gifts – including Olly Bobbins’ signature tartan roses.

The handcrafted tartan roses gift range is available in a wide range of clan tartans and Harris Tweed, as well as in Olly Bobbins’ own exclusive ‘Memories of Scotland’ tartan which Paul and Joe created during lockdown. Taking inspiration from Highland landscapes, the purple base colour of the new tartan was chosen to reflect fields of heather, flecked with shades of deep magenta, whilst a green line which runs through the tartan signifies rolling forests, with a deep bottle green highlighting it either side. These colours combined to form the Olly Bobbins ‘Memories of Scotland’ tartan which was officially registered with ‘The Scottish Register of Tartans’ (Ref #12848) in June 2020.

Furthermore, the company’s striking collection of giftware is enjoying increasing attention and a swell of orders both in Scotland and internationally, including across the USA, Canada and Australia, where the ‘Memories of Scotland’ tartan was named as Tartan of the Month by the global Scottish Banner publication last year.

In addition to the new Overgate store, Olly Bobbins also has a store in Inchture which was recently crowned Scotland’s ‘Boutique Florist of the Year’ by Scotland’s Prestige Awards.

“We are delighted to have expanded our offering and to re-open within a shop unit in the centre. As an independent business, this is a major step forward for us and after a very difficult year for retail it is great to see our hard work pay off. Being a joint winner of the GROW at Overgate competition, we have to thank Legal & General for their support of our vision and working with us to reach this point. The response from the public to our new shop has already been hugely positive and we are excited to be able to use the new space to increase our offering of fresh flowers and plants, and bring back our workshops as restrictions ease.”

“Olly Bobbins made a compelling business presentation for GROW at Overgate, and for Paul and Joe to now be in the position where a year later they have expanded into a standalone physical store as paying tenants, is everything we all collectively wished for. The new Olly Bobbins opening brings a fresh retail offering to Overgate, within an attractive modern store, and a product range that is clearly proving popular. We wish the company every continued success.”